Since spring and then summer have arrived, my babyboy and I are enjoying good weather outside every day (well, we went outside at least once every day before but obviously not as long and he used to be mostly in his push chair then). Before I was a mother I already knew that kids like to go outside but I really didn't have a clue how strong that desire is! It really is in the nature of children to leave the house and spend their time under the open sky. This can be a bit tiring at times (especially when the first thing he is saying when he gets up is "Fuhe, jaus!" (= "Schuhe, raus!" = english: "Shoes, outside!" - he is 21 months now and only learning to speak) and we haven't even had breakfast... But it is also very nice and good for me - I haven't been that tanned in ages, my mood is a lot better and I think my health has improved considerably. Even though I refuse to spend the whole day outside usually (Emil has to have his nap times every day, I have to do some housework and going outside always also means descending three stories on a staircase where I have to carry my baby who already weighs 15 kg when dressed which is quite exhausting...- that's the downside when living in an apartment in the city no matter how small that city is, we can't just go out the door into the garden and back again) but we spend several hours outdoors, either on the playground, strolling through the town, going to the swimming pool, visiting friends or the grandparents (and they have a garden!) or making small trips. Watching Emil enjoy nature is heartwarming and also very reminiscent of my childhood. I think I haven't appreciated hot temperatures and the outdoors that much since I was a child myself and I thank my toddler for giving me this life lesson (one of many lessons he taught me and is still teaching me).

I am very proud that so far I am doing yoga or a kettlebell workout every day! Okay: maybe I sometimes take one day off when I am not feeling well but who cares? I feel very fit and I can even see the benefits on my body - there are really muscles somewhere underneath my bodyfat!


But more important is that it makes me feel better. The only thing I am neglecting is the meditation/mindfulness training. And the healthier diet. I don't know why I can't bring myself to improve in this respect - I am really aware of how much I would benefit from it. However, I try not to scold myself too much for it and focus on my progress because I hope that by being positive the other resolutions will eventually be fulfilled (sorry - you probably can't say that but you get what I mean) as well. 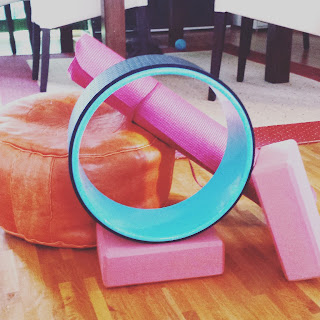 Last year I bought some yoga props and I don't regret the purchase. I love the yogawheel as it helps you get into asanas that are too hard for you or you are afraid of. I use the blocks mainly to work on my splits as I noticed I'm turning my hips while doing the splits and this isn't the correct way to do them. The strap is great for stretching further into certain poses. To sum it up, all of the props really help you to improve your asanas and I can really recommend them.

I am most excited about my progress with the inversion asanas (handstand, forearmstand, headstand,...). The yogawheel mainly gives you the security to try those poses because it's mostly fear which keeps you from trying them!

I only started the kettlebell training because my husband did but I am very satisfied with the effect - you feel yourself getting stronger every day which is very helpful when you have to carry around a 13 kg toddler all the time. But it doesn't make me look like Arnie - thank God!

I really hope I'll keep up the training. Maybe now that it's on my Blog it will be an even bigger incentive to do so.
Eingestellt von Sibylle um 05:34 Keine Kommentare:

Unfortunately, the last quarter of 2016 has been a bit problematic for me health-wise. Nothing serious but it kept me from  keeping up the yoga routine I had taken up throughout August and September (I am blaming my very bad diet and some too extense exercises).
My health was improving in December but at the start of the New Year I caught a cold so now I have to stay in bed instead of trying to fulfill all my New Year's resolutions. But then again, even though I am not happy about it it also means that the year is very likely to improve for me. And I might not be able to start daily exercises again at the moment but I can try to eat more healthily and (very important for me) to drink more! Not alcohol though, apparently. I am trying to drink two liter of camomile tea during the day at the moment - to fight the cold mainely but I think I'll try to keep this habit up.
And even though I can't do exhausting exercises at the moment I have a new plan to do some physical exercises every day which are not exhausting - just a little stretching to train the fascia (I've read a very interesting article on the most recent research on the fascia today!).
My other resolutions are as uncreative as the above: read more, be more creative (sewing, knitting, writing, drawing...), more meditating, character-improvement (trying to be nicer and not a bitch so often), cooking, ... That's all I can think of right now. If I manage to do at least a little more than last year, I'll be content :)

Whoa! It's been a LONG time that I last posted something here. I feel very guilty - my numerous readers and followers (Well, hello there Marina and Anke!) must be craving for a new contribution to this blog! (I don't even know if the designation "blog" is still valid after a break that long... But anyway, here I go again!)

Of course A LOT has changed in my life! I am a mom now and my cute little baby isn't even really a baby anymore - he is my cute little toddler and apparently quite big for his age.
Now I am a stay at home mom - and at the moment I am very happy with this arrangement.

We also proceeded in furnishing and decorating our apartment and I am eager to post some photos of the results here :)

Well, actually, I can't think of any more changes but then again the first change is such a major one that it weighs at least ten times as heavy!

It's funny to see how sometimes your life doesn't change much for several years and then even a couple of months or even one day - or even second - can change everything! But if those changes are as positive as the ones I have been experiencing in the past 16 months I don't mind :-D

At the moment, it is rather hot and humid in Germany and it is kind of hard for me as I am entering the last weeks of the pregnancy. A delicious way to cool down is this quick milk shake:

1 banana (can already be a few days old)

a handful of deep-frozen berries out of the freezer (e.g. raspberries)

Mix all the ingredients with a blender and enjoy! :-) 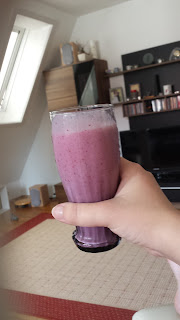 A Magic Dwells in Each Beginning...

In retrospect I have to admit that it was fairly optimistical for me to say that I'd be back soon. However, I don't want to state the reasons and it doesn't really matter anyway. Of course, a lot has happened since my last post. My husband and I decided to buy an apartment, I got pregnant, I became an auntie, my husband and I moved into the new apartment... A-many new beginnings - and Hermann Hesse was definitely right when he said "a magic dwells in each beginning"! When I remember all of the beginnings I listed above, it's like they already merged into a fairy tale kind of memory and I can almost hear myself telling my grandchildren the stories about how Timo and I found our dream apartment, how we found out that we were expecting a baby, how my little nephew entered my life or how Timo, Emma, and Leo spent the first night in our own apartment...and I can't help but smile!

Two weeks ago, Timo, Mama and I went for a walk in the forest to look for mushrooms. It was great - a nice sunny sunday afternoon! A mushroom foray is a great mindfulness exercise: you have to be in the moment, all senses acute to be successful (or you have to be like Timo who somehow found one mushroom after the other without any real talent for it - he was just lucky I guess). The mushrooms we found (yes I found at least a small number) were very delicious and obviously edible as we're still alive.

Even though I only found few edible mushrooms I found this beautiful fella over here. Even though you can't eat it I think it is a really nice and often surreal looking mushroom. This one was illuminated by sunshine and it was just perfect for taking a picture. Timo found an edible bolete very close to it and found it hilarious that I got abstracted because of this poisonous one but I am very happy about having found it and having taken this photo! 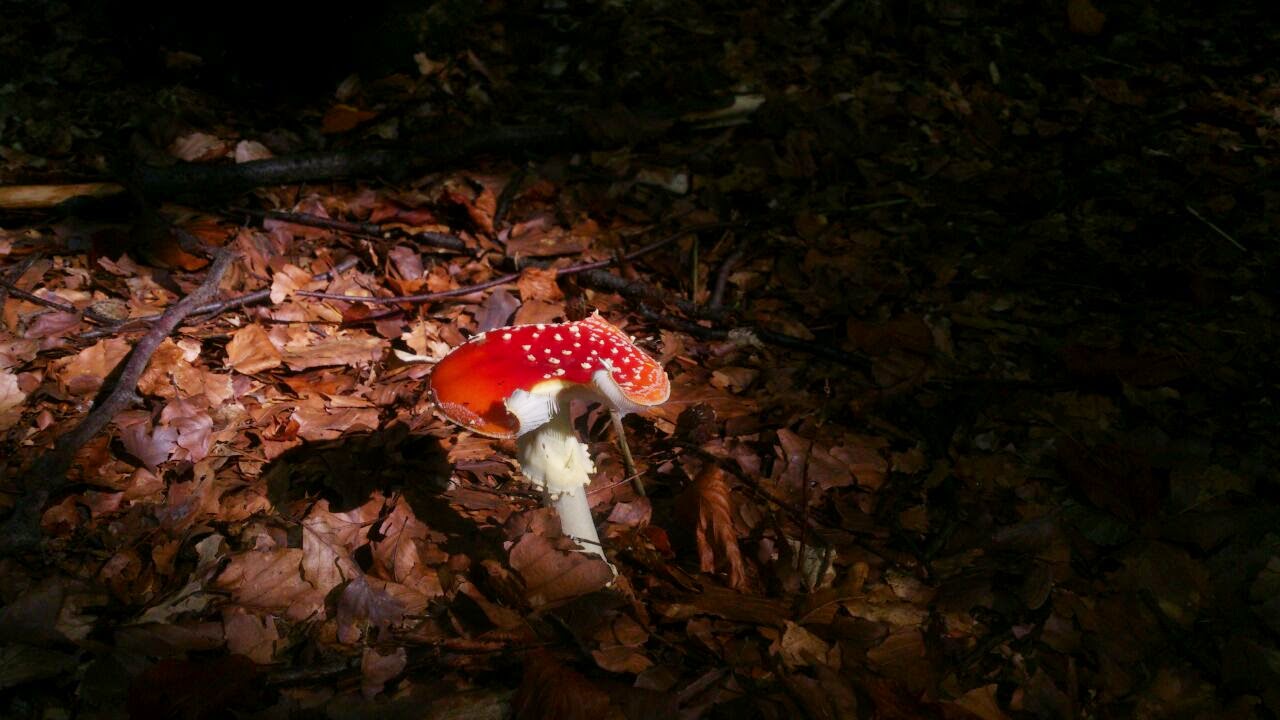 PS: Yes, I just ignored the fact that I have been absent from this blog for nearly three months. I started a new job and just haven't been in the mood. But now I start to get used to it so I guess I'll be back soon:)
Eingestellt von Sibylle um 14:19 Keine Kommentare:

Sibylle
In Greek Mythology Sibyls were oracles and wise women. I have neither the gift of foretelling the future nor am I a wise person. However, I've called this blog "The Temple of Sibyl" because that’s my name and I consider this blog as some sort of retreat - my temple where I can collect my thoughts and can write about all the things which cross my mind.